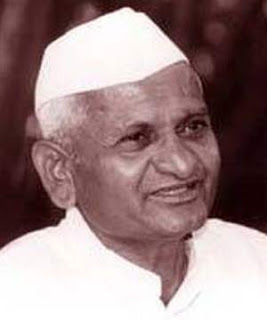 Anna Hazare, the tough-as-nails Gandhian is fasting so that the Jan LokPal bill, a strict bill against corruption is passed by the Parliament. Every government since decades has been dragging its feet and delaying this bill. It is no wonder because in the politician-babu-bureaucrat nexus, each flourishes on corrupt practices. The cancer of corruption has spread too far and too deep in this country and is threatening to consume the so-called progress. Corruption affects each of us in every sphere of life. Whether it is getting documents for your home, your passport, your birth certificate, most government work moves only after greasing the palms of unabashed government officials who demand bribe with such impunity that it is seen to be believed. Yes, we can afford to close our eyes. We can bribe our way to bliss. But, that is exactly what has brought India to a verge of despair.
There is poverty and hunger as most of the population struggles with survival. Funds given by you and me as taxes are siphoned off as multi-million dollar scams into the pockets of these politicians and bureaucrats as bribes and kickbacks. You and I have seen it for far too long. And, it is time to say enough! We have a movement now.  We need to do our small bit to contribute. We want this bill to be passed as law so that an independent body can control and punish this unbridled corruption.
It is time for all Indians to show support for this movement in whatever way they like. But we have to ensure that this intensifies, becomes larger and ensures that the government can no longer get away with inaction. Thank you Anna Hazare for showing us the way, the same way as you did many years ago during the freedom struggle. It is heartening to see the youth and elderly alike supporting this movement. We hope that this agitation will see our demands reaching fruition.
My husband and I will fast 12 hours during the day every single day to express our solidarity with Anna. We hope you take a small step too!

19 Thoughts on “Movement against Corruption”