by Rachna ⋅ 63 Comments
Today, I have the pleasure of hosting K. Parthasarathi of random thoughts on my blog. A grandfather with a razor-sharp mind and a wonderfully warm and encouraging person, Partha Sir churns out lovely stories. I always marvel at his amazing ability to write stories belonging to all genres. Do head to his blog and check out his huge repertoire. Now on to this story 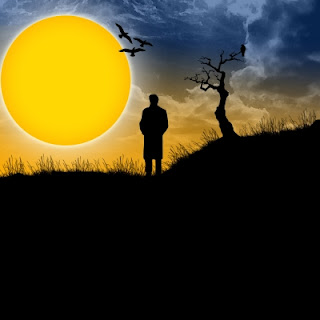 I have no belief in superstitions. There are people who return home when they see a cat crossing their path or if someone asks them where they are bound for. I am not deterred by such things and proceed with my work as if nothing had happened. Someone’s sneeze is due to an allergic trigger and has nothing to do with the outcome of the work I am about to begin. I start my work in Rahu kalam unperturbed, and I have never been the worse for that. Yet when the black dog howled continuously for two nights, I was concerned about the old woman chronically ill in the adjacent apartment in our huge complex. I have heard my mother telling me in my young days that dogs had the power to see the messenger of Yama hovering around the house a couple of days before actually snatching the life. But I brushed it aside.
That evening after dusk, as I was sitting in the park like place on one of the benches watching the several tall buildings with lights from most windows and balconies, I did not notice initially the man who came to sit in the bench beside me. When I finally saw him, he was dressed in black robes with a mustache that was disproportionately big and bushy for his face. It was not a pleasant face, something weird there that I could not exactly place. Nevertheless, I smiled at him and raised my eyebrows to inquire who he was.
He responded instead with a cryptic remark “two.”
I could not follow and asked him to explain. He grinned that seemed more like a scowl and said, “You will know” before he left and faded in the darkness. On the second day exactly the old woman passed away. I could not but recall the terse comment from the black figure.
About a fortnight later when I saw in the same venue one late evening the black guy, a shudder passed through my spine. This time he smiled at me first. I managed a grin but avoided asking him anything. He asked, “Could you follow what I meant as two last time?”
When I nodded my head, he showed to my great shock one finger. When I looked askance at him, he said, “one.”
There was no one known to me who was sick. News spread fast in the complex. I should have known. I smiled and said, ’This time your guess may be off the mark” with a derisive giggle. He left immediately without a word.
When I returned from office the next day evening, I saw a crowd gathered around swimming pool. I rushed there with trepidation only to find that a young boy of seven had drowned by jumping in the deeper side when no one was around. Fear grew in me, as I thought of the messenger of death. I avoided going to the park side completely.
A couple of months later I was held up in the office. It was 8pm when I left. As I took the motorbike from the rather empty parking lot, I found the dark man standing there. I had a mind to turn back and get into the office. He called me and said, “Are you scared of me?”
“Why should I be scared of you? You are not Yama deciding when to take one’s life. It was sheer coincidence in the last two cases.What is it this time?” I asked.
“Don’t challenge me. There will be one before midnight,” he said sharply and left.
I cursed this purveyor of bad news and started my motorbike. The dark figure was very much in my mind, and I was shaken by the news.
It was 11pm.There was an ambulance outside my complex with some policemen. The complex was abuzz with crowd around my flat commiserating with my family members. Who could it be this time, I wondered? I saw my wife and two kids crying inconsolably. Who else I wondered. I saw in disbelief my crumpled motorbike in one corner at the entrance.
PS: Image courtesy:FreeDigitalPhotos.net